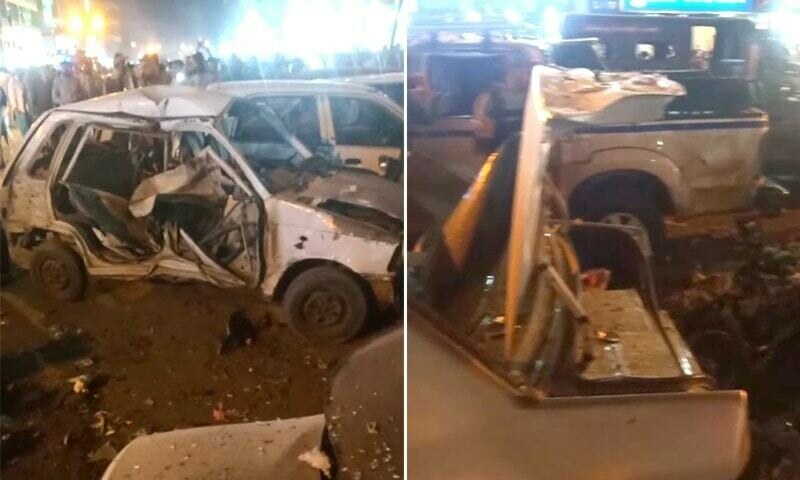 A passerby was killed and at least nine others were injured when an explosive device (IED) planted on a motorcycle left the busy Saddar area on Thursday evening, officials said.

The blast took place at the Saddar shopping center, which is always crowded at night due to the presence of restaurants and bars on Daud Pota Road near the oldest United Bakery.

Dr Summaiya Syed, an additional police doctor at Jinnah Post-Graduate Medical Center, said so far the body of the boy and nine injured people, including three teenagers, had been taken to hospital. He said the condition of the two injured people was “very serious”.

The blast caused extensive damage to property, including vehicles, in the area. A photograph from the site showed a Pakistani Coast Guard vehicle also damaged in the blast.

Sindh Inspector General of Police (IGP) Mushtaq Ahmed Mahar has told Chief Minister Murad Ali Shah that an improved explosive device (IED) was used, a spokesman for the latter said in a statement.

According to the first probation report, it appears the IED is attached to the motorcycle, the IGP was quoted as saying.

Karachi police chief Ghulam Nabi Memon said It was morning if the explosion mode is set. He said it would be “premature” to say that the bombing was aimed at a Pakistani Coast Guard vehicle. He said, however, that it was not a typical maritime agency car.

DIG-South Sharjeel Kharal, in a press release, stated: “According to the information received, the device was switched off at 11:20 p.m. ”

CM Sindh noted the incident and sought a report from the city police chief and commissioner of Karachi while declaring the state of emergency at two nearby hospitals, Jinnah Postgraduate Medical Center (JPMC) and Karachi Civil Hospital.

A team of Bomb Disposal Squaders and officers from the terrorist police department arrived at the scene of the bombing to investigate.

He said the terrorists wanted to disrupt the city’s peace, as he had vowed to punish the perpetrators.

Prime Minister Shehbaz Sharif expressed regret over the incident and conveyed his condolences to the family of the deceased. He prayed for the speedy recovery of the injured and instructed CM Shah to provide the best possible treatment for them.

The premier said “terrorism will be eradicated” in collaboration with provincial governments.

Interior Minister Rana Sanaullah also noted the incident and called for a report from the Secretary-General and the IGP.

“The federal government will provide full support to the Sindh government to conduct a thorough investigation into the incident,” he said.

The incident comes less than a month after a bomb blast at the University of Karachi Confucius Institute killed three Chinese academics and their bakkie driver. The illegal Balochistan Liberation Army (BLA) force claimed responsibility for the attack.