15 killed, 6 injured in van-truck collision on Indus Highway between Jamshoro and Manjhand – Pakistan 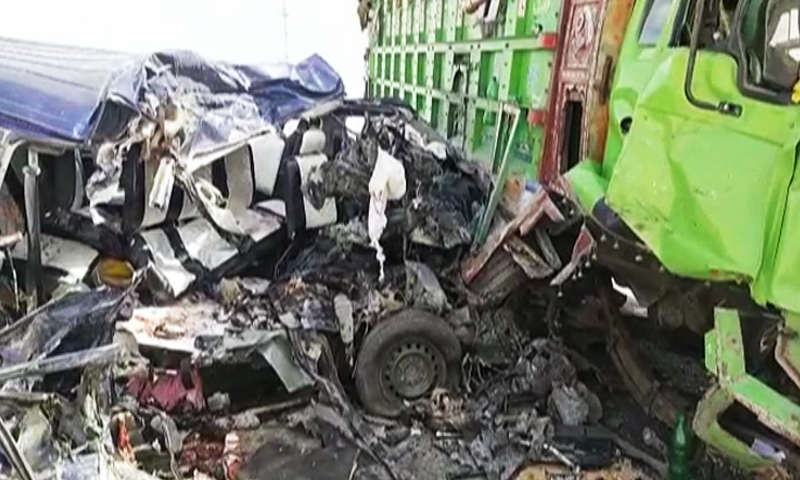 Fifteen people were killed and six others injured when a bakkie collided head-on with a truck on the Indus road near Sann on Wednesday.

According to Jamshoro Deputy Commissioner (DC) Fariduddin Mustafa, the accident took place on the Indus Highway (Jamshoro-Manjhand) where development work on the two lanes was delayed by the National Road Traffic Authority (NHA).

He said work on the division was delayed because he had a contractor listed on the blacklist and the NHA was said to be in the process of re-awarding tenders.

The accident happened near the Shah Awais turn-off on the freeway. The truck was traveling from a coal mine to Sehwan when it collided with a bakkie traveling from Kandiaro to Karachi.

The DC said the dead and wounded belonged to the Solangi and Kalhoro tribes, which he said were employees of a salt factory in Sher Shah, Karachi.

Following the crash, police and local authorities rushed to the scene. Edhi volunteers transport the injured to Manjhand and Khanote hospitals. Others were taken to Liaquat University Hospital in Jamshoro.

Sindh Chief Minister Syed Murad Ali Shah expressed regret over the incident and instructed the Hyderabad commissioner, the Deputy Commissioner and the chief of police to extend full cooperation to the bereaved families.

“The injured should be rushed to a nearby hospital for treatment. [native] areas, ”said the prime minister, adding that doctors should be called to Liaquat University of Medicine and Health Sciences if necessary.

Article 63-A: ‘Defection is a menace but lifetime ban would be severe punishment,’ observes CJP – Pakistan