2 Sikhs gunned down on outskirts of Peshawar – Pakistan 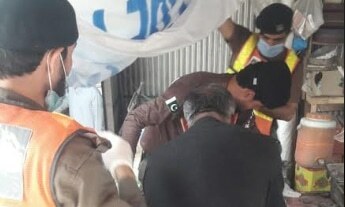 Two members of the Sikh community were killed after unknown assailants opened fire on the Peshawar border, police said on Sunday.

In a statement, Peshawar City Police Office Ijaz Khan said the incident took place in the area under the control of Sarband police station.

He also identified the victims as Suljeet Singh, 42, and Ranjeet Singh, 38, adding that they own a spice shop in the Batatal area.

Police arrived at the scene shortly after receiving information about the incident and transferred the bodies to a hospital for autopsy, Khan said, adding that officers were also gathering evidence at the scene.

“CCTV cameras from surrounding areas are being monitored,” he said, adding that a search operation had been launched to search for suspects who had escaped.

“Those involved in the incident will be exposed soon,” said the official.

Khyber Pakhtunkhwa Chief Minister Mahmood Khan took note of the incident and ordered the KP Inspector General of Police to arrest the perpetrators. He added that the incident was an attempt to violate the Peshawar law and order.

In a statement, PM Shehbaz told the prime minister to take steps to ensure the safety and well-being of the people, especially the minority. He also ordered the KP CM to ensure the arrest of the suspects and to punish them legally.

He held the “enemies of Pakistan” responsible for the incident and vowed to “wipe them out of the face of the earth”. He also assured the families of the victims of the co-operation of the federal government in the arrest of the suspects.

Meanwhile, Bilawal called for the immediate arrest of those involved. “No one shall be arbitrarily deprived of his nationality nor denied the right to change his nationality,” he said in a statement.