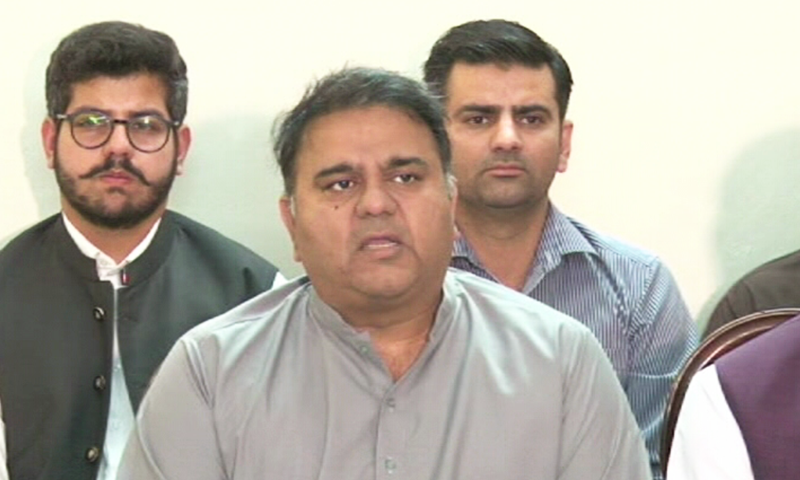 PTI senior vice-president Fawad Chaudhry said on Friday he expected Pakistani Chief Justice (CJP) Umar Ata Bandial to rule this week on the establishment of a judicial commission to investigate allegations of “foreign conspiracy” by the former prime minister. Dismissal of Imran Khan.

The PTI leader claimed that Information Minister Marriyum Aurangzeb, who called him “incorrect information”, had admitted at a press conference yesterday that the thread – which allegedly contained “conspiracy” – “true” information.

“[The incumbent government] we said we would support the commission of our choice. We have clearly rejected it, ”he said at a press conference in Islamabad.

The PTI is seeking a court commission instead, Chaudhry said, adding that he expected the CJP to take a decision on the matter this week.

At the beginning of his press conference, he said the ruling government was in a state of disarray and that the largest province was facing an administrative crisis but no one was concerned or willing to take responsibility.

The Pakistani Electoral Commission (ECP) has suspended detention related to the banning of opposition PTI lawmakers until Tuesday and announced it would take timely decisions, he said. However, there was an urgent need to address the problem in Punjab, he said, urging the ECP not to treat the case “as a business as usual”.

“We have adjourned the hearing on Tuesday, and hold it tomorrow instead. Complete the event in Punjab, ”he said.

He was referring to the current political situation in the province where Prime Minister Hamza Shehbaz had not yet announced his cabinet while Governor Omar Sarfraz Cheema called on the military to take action against the “illegal, illegal and fraudulent” CM.

Chaudhry noted that the Supreme Court would again hear the presidential referendum seeking its interpretation in Article 63-A, which deals with the disenfranchisement of lawbreakers, on May 9 and called for positive action.

He appealed to the high court to announce a decision that could be implemented. I believe that if these decisions are announced soon there will be political stability in Pakistan.

The PTI informed the Supreme Court that people were not allowed to vote in the Punjab, saying that, as a result, the government of Prime Minister Shehbaz Sharif had the support of only 173 representatives.

You need the constant support of 172 people to stay the prime minister. [lawmakers supporting PM Shehbaz]three have refused to do so even more so the current power is 168 or 169. A minority government has been set up. ”

As soon as the Supreme Court announces its decision, the coalition government will have to hold a vote of confidence, Chaudhry said, claiming it lacked the necessary support for the 172 deputies.

“I firmly believe that the Punjab government will be sent home before May 12 and the coalition government before May 20. Democracy will be restored in Pakistan. The people must ultimately decide who will be in power and that will be done by election,” he said.

The second stage of the auction

Chaudhry has announced that PTI Chairman Imran will launch the second phase of the assembly today in his hometown, Myanwali. The rallies will be held in various cities from 6 to 20 May, adding that Imran will announce the last day of the group’s long march to Islamabad between 20 and 29 May.

“All staff must be prepared. The sea of ​​people will appear to be coming towards Islamabad. Such a dramatic change has never been seen by anyone.”

He said leaders of some unions had been wondering how long the union’s staff would remain exposed to the heat, adding that it was still a matter of whether the PTI workers would stay outside or the current parliament. .