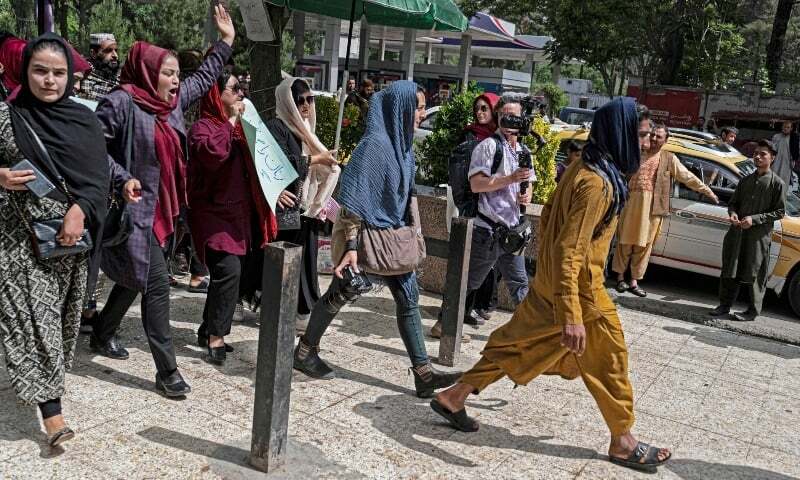 About a dozen women protested in Afghanistan on Tuesday against a new Taliban law requiring women to cover their faces and bodies in public.

Afghanistan’s top leader and Taliban chief Hibatullah Akhundzada issued a directive over the weekend ordering women to fully cover themselves, appropriately with a roaring traditional burqa.

Diktat was the latest in a series of creepy barriers in Afghanistan, where the Taliban have pushed back the profits made by women after a US-led offensive overthrew the first Taliban regime in 2001.

“Righteousness, justice!” sang the protesters, many with their faces uncovered, in the center of Kabul.

Protesters also chanted “Burqa is not our hijab!” – showing their opposition to the trade with a headscarf under the hijab that completely hides the burqa.

After a short march, the procession was stopped by Taliban militants, who prevented reporters from reporting on the event.

Akhundzada’s law, which required women to “stay at home” if they did not have important work outside, resulted in international sentencing.

“We want to live as human beings, not as an animal trapped in a corner of a house,” protester Saira Sama Alimyar told a rally.

Akhundzada also ordered the authorities to dismiss female employees who did not follow the new dress code and to suspend male employees if their wives and daughters failed to comply.

In the 20 years between the two Taliban positions in power, women made significant gains in education, workplace and social life but a corrupt and patriotic attitude still existed.

In rural areas, many women continue to wear the burqa for the next two years.

But many theologians and activists say that the dress code is not based on Islam and that it is a Taliban dress code designed to oppress women.

After seizing power last year, the Taliban promised a softer version of the harsh policy that marked its first place in power from 1996 to 2001, but many restrictions have already been put in place.

Some Afghan women initially pushed back, holding small protests in which they demanded the right to education and employment.

But the Taliban quickly rallied the party leaders, keeping them in ignorance while denying any wrongdoing.

Since their release, many have remained silent.