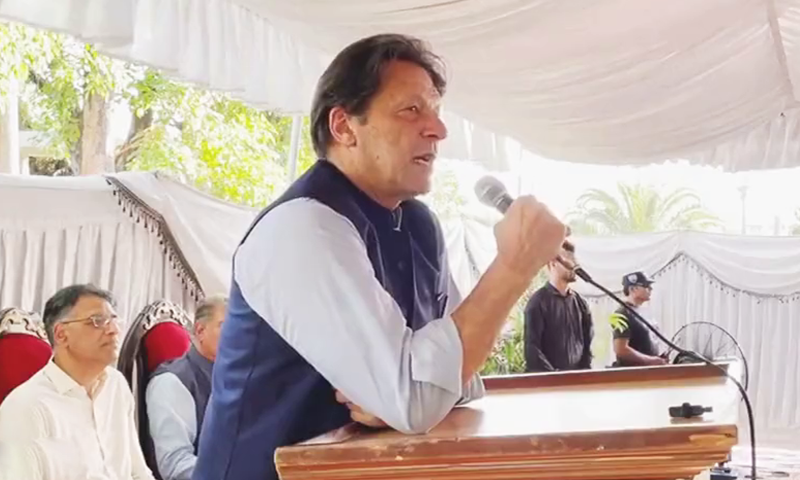 PTI chairman and former prime minister Imran Khan on Sunday said lawmakers elected to reserved seats and “sold out” their loyalty should be “jailed”.

A voter may object that the PTI was unpopular in his area and he had to leave the ship, he said while addressing a gathering of Punjab lawmakers in Islamabad.

That is understandable [but] how one can go [to the other side] in a reserved seat? They have clearly sold their conscience. They should be ashamed […] they should be sent to prison directly.

Imran began his address by paying tribute to the lawmakers’ efforts to “fight until the last ball” at the Punjab Convention. “I went to meet Asia [Amjad]. He looked better. He can’t speak yet but he is fine in another way, thank God, ”he said.

Amjad was rushed to a private hospital in Lahore last month after his health deteriorated and he was treated for a blood clot in his brain. The PTI claimed that the attorney was “tortured” by police and the PML-N “goons” during a riot at the Punjab Convention on April 16, when the prime minister was elected.

The chairman of the PTI noted that although Amjad could not speak when he visited him, he was full of love.

“You all went to the test and did very well — some of them excelled,” she said, referring specifically to “Pindi’s team” and the way women behave.

“She passed the biggest test. And she got a special honor at the event and in my eyes.”

He went on to say that the berries that had abandoned the party, after making great demands of the sacrifice, were humbled forever. People will remind their children of what they did.

He went on to say that some people had advised him to buy into the loyalty of those who were against the law. “Our people have told me that we can buy their people, we want billions of dollars and buy eight to nine people.

But I have made a wise decision.

He said the people who would donate the money would then strengthen their confidence in receiving the money and he would eventually be demoted to the level of other political parties.

“What has this achieved? It has brought about a change that none of you can imagine, ”he said, adding that only time will prove to be the turning point in the country’s history.

Imran said his political opponents and their “bosses” thought he would lose his breath after holding a rally in Lahore. I can assure you that I saw this in Myanwali yesterday […] I have never seen such a rally in Myanwali, ”he said, referring to a rally held on Friday.

He understood that the local people came out of the well-known heat of the city and appreciated that they were well aware of the series of events leading up to his expulsion. “Everyone knew, they knew what I was going to say before I said it.”

Speaking of “public dissatisfaction” about the discarded clothes that have left the party, Imran has announced that they will never be able to win another election. “Their political days are over. They did not realize it, they thought it was a thing of the past. They do not know that this country has changed completely.”

He further added that the “thieves” band, a reference to the PML-N and PPPs, was shocked by this. He added that the government – the containers and all – could not stop people from coming out of the PTI march in Islamabad.

Imran said he has seen the growth of the community now expand in the coming days, urging lawmakers to make money from it and prepare for their vote bank. “None of you should waste this time, it will never come again.”

He urged MPPAs to approach the people, assuring them that people would approach them with great respect. Everyone knows what happened in this country.

The former prime minister said the country was well aware that the government had been ousted by the US government for contacting local “Mir Jafars”.

He further added that PML-N Deputy President Maryam Nawaz was adamant that the ‘letter of intimidation’, which was thought to contain evidence of a plot to oust the previous government, was untrue. “Anyone who supports his politics is a liar […] you will only tell lies.

He confirmed that two meetings of the National Security Committee – “including one chaired by Prime Minister Shehbaz Sharif” – had reaffirmed his position in the letter. Imran also lamented that after the American conspiracy was blamed, “thieves and convicts” were brought into power.

But if you spend one day, it will hurt you […] Normally a politician goes to the people to fix his vote bank but today people are waiting for you. I can assure you that those who voted for the same party over the last 30 to 40 years are now waiting for you, ”he said, adding that time is of the essence.

He further added that lawmakers had passed a major test, adding that they would be prioritized when awarding party tickets. “But if you do nothing, I will investigate,” he said, promising to oversee the distribution of party tickets.

After downing Nadal and Djokovic, ‘mature’ Alcaraz says he is ready for the big league – Sport