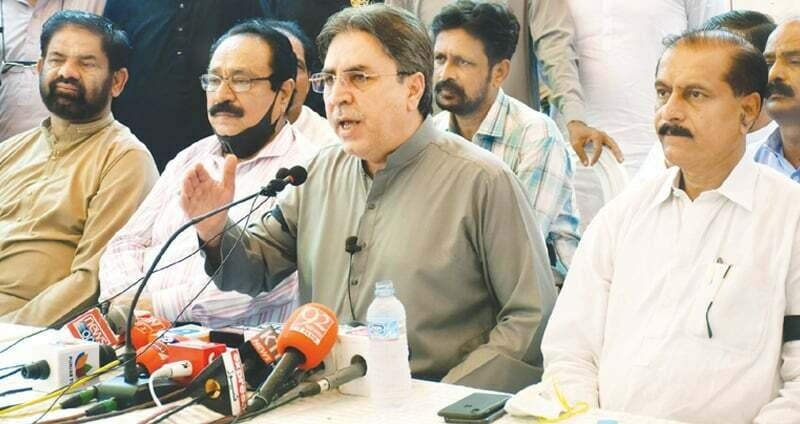 An anti-terrorism court on Wednesday described the “lack of evidence” for the release of Muttahida Qaumi Movement-Pakistan (MQM-P) leader Amir Khan and two others in a case involving the detention of suspects at the party’s now-sealed Nine Zero headquarters in Karachi.

On Wednesday, the case came before an ATC-VII judge, who filed a lawsuit in a court of law within Karachi Prison to announce the sentence.

Khan appeared on bail while Raees and Qazi were released from prison.

The judge held that the prosecutor had “failed miserably” to bring charges against the three men and, therefore, not to be guilty of any wrongdoing.

The judge revoked Khan’s bail and ordered the prison authorities to release the other two immediately if their detention was not required.

However, the couple could not be released as they face other criminal charges.

Police arrested the suspects and several others during a pre-raid on the party’s headquarters on March 11, 2015.

During a pre-trial hearing, Ranger Special Prosecutor Rana Khalid said the military had arrested Khan and 26 others, including Faisal Mehmood alias Mota, who was sentenced to death without trial for the murder of Wali Babar.

He said the MQM leader, along with five others, allegedly provided shelter to criminals who were using terrorism in the city. The joint research team recommended the registration of the case against Khan, he added.

The prosecutor also said that there was “sufficient evidence” to find that Khan was using orders from Raees, Qazi and three fleeing suspects – Shahzad Mullah, Imran Ijaz Niazi and Naeem alias Mullah – to commit crimes, including terrorist acts.

He had pleaded with the judge to punish him severely in accordance with the law.

On the other hand, defense lawyer Shaukat Hayat claimed that Khan was a member of the Rabita MQM Committee at the time of his arrest, which was a registered political party in the country. He further added that the headquarters of the Nine Zero party were for political purposes, where no criminals were protected. Second, he said, the prosecutor failed to produce evidence, including initial information reports, in which his client was shown to issue orders to commit criminal acts.

Security adviser Mushtaq Ahmed claimed that Raees was arrested on March 26, 2018, at Jinnah airport on his flight from Malaysia, presumably with the help of Interpol, and later detained in Karachi prison, where the investigating officer is from. he had been arrested.

He further added that Qazi was shown arrested in the 2016 case at Mehmoodabad police station where he was charged with the murder of Shahid Hamid in 1997.

The court was asked to release them on “false and false” charges against the prosecutor.

The three fleeing suspects have already been declared criminals by the court.

The case was registered under Section 11-V (directing acts of terrorism), 21-J (ultimately any person who committed the offense under this act) and 7 (punitive act of terrorism) of the Anti-Witchcraft Act, 1997 with a complaint from a Ranger Officer at Azizabad police station.