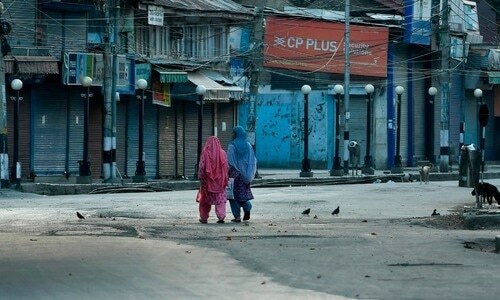 The Independent Human Rights Commission (IPHRC) of the Islamic Cooperation Organization (OIC) on Friday “strongly criticized” the Indian government for the destruction of polling stations in Jammu and Kashmir region, calling for a violation of the OIC and the United Nations. Security Council.

In 2019, the government of Prime Minister Narendra Modi split the Indian subcontinent into two territories as part of a plan to strengthen power in the region. The former territory included the Kashmir Valley for Islam, the Hindu-dominated Jammu region, and the isolated Buddhist community in Ladakh.

However, earlier this month, the Indian government said the commission closed the 90-day assembly of Kashmir, outside Ladakh, with 43 Jammu seats and 47 Kashmir seats. Immediately, Jammu had 37 seats and 46 Kashmir valley.

The border reduction commission said it was difficult to accept competing claims from different parties, citing a report on the “extraordinary cultural landscape”.

“The IPHRC appropriately supports the rejection of the Kashmiri political leadership in these illegal activities, which continue with the militant group ‘Hindutva’ inspired by the illegal actions taken by the Indian government at IOJK after 5 August 2019,” he said.

The statement recalled that the Kashmir political leaders had repeatedly refused and rejected the election policy in the affected area, and, after that, criticized India’s attempt to re-list the polling stations there.

The OIC called the law “a serious attempt to change the electoral environment in a way that could influence the results of fraudulent elections to include cartoons of the governments of their choice”.

“These evil measures are aimed at transforming indigenous Muslim communities into minorities in their country and preventing the exercise of their inalienable right to self-determination,” he said, adding that measures were against many human rights treaties in the Fourth Geneva. Conjugation, which prescribes any changes in the demographics of the captured areas.

It also called on the UN and the international community to play its part in forcing India to adhere to the appropriate decisions of the UNSC and OIC to refrain from any administrative and legal actions, such as changing geographical and demographic conditions in Kashmir, to restore all . fundamental freedoms of Kashmiris and to abolish all discriminatory laws and to allow the people of Kashmir to exercise their inalienable right to self-determination and liberty, as provided by the UN Security Council and OIC resolutions.

Earlier, the Pakistan Foreign Office (FO) had stated that it would stage a protest against the Indian Charge d’Affaires, appealing to the Government of Pakistan to reject the report on the so-called ‘Border Commission’, which was targeted. imprisonment and seizure of power by a large Muslim population in Jammu India who live illegally in Jammu and Kashmir (IIOJK).

The FO has called on India to stop bringing any illegal changes to the affected region, immediately stop its pressure on the IIOJK, and allow the people of Kashmiri to decide their future freely and fairly under the UN.