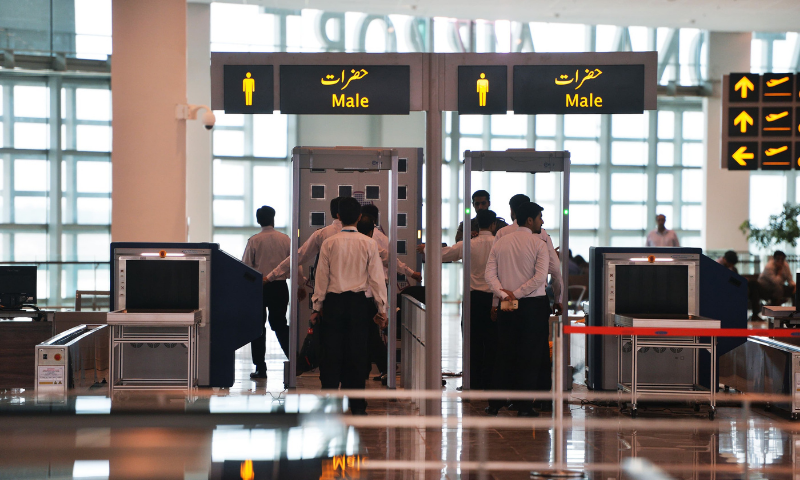 The National Institutes of Health (NIH) on Sunday decided to raise the bar on ongoing Rapid Antigen (RAT) testing of inbound travelers at airports across the country based on the global coronavirus status, it said in a statement.

In a series of tweets today, the institute – which led Pakistan’s Covid-19 response after the National Co-operative Center (NCOC) was officially closed – said RAT was being conducted informally as a precautionary measure against Covid. -19 work.

“After reviewing the recent global situation of Covid-19, and the directive of the Minister of Health, the CDC, the NIH has advised CHE (Central Health Establishment) to increase the range of ongoing Covid-19 RATs at international airports “In a systematic way, for travelers from different countries,” he said.

The NIH added that the main purpose of the decision was to remain vigilant and monitor and monitor access points in order to quickly detect any contagious case.

The measures, he added, are being implemented on the advice of the health minister and will remain in effect until further notice.

The first case of Omicron sub-diversity found in Pakistan

The development comes after the first case of Omicron sub-variant BA.2.12.1 was discovered in Pakistan earlier this month.

On May 9, it was reported that a man who had arrived in Islamabad from a foreign country and had been diagnosed with the disease at the airport, a national Department of Health official told Parhlo. All contacts are locked in solitary confinement.

A health official said the patient had been tested at the airport and later, during genome sequencing, was confirmed to be infected with the new strain. “We have decided not to mention the name of the country where the patient was traveling to Pakistan. However, a new species has spread to various lands. The patient feels well and all the contacts are kept in solitary confinement, ”he said.

“Although the differences are more contagious, the good thing is that all vaccines work against it. We therefore urge more people to get vaccinated early and vaccinated people to get their vaccines, ”he warned.

The new Omicron sub-diversity is a descendant of the “stealth Omicron” which became highly contagious and quickly gained a foothold in the United States.

BA.2.12.1 was responsible for 29 percent of new U.S. Covid-19 infections in the third week of April, according to data reported by the US Centers for Disease Control and Prevention. And it caused 58pc of reported infections in the New York area.

The difference has been found in at least 13 other countries, but the US has its high levels so far. Scientists say it spreads faster than the secret Omicron.

Following the discovery of the Omicron sub-division, Prime Minister Shehbaz Sharif ordered the immediate return of the NCOC established by the PTI government in March 2020 to oversee its response to the coronavirus epidemic. It was dismissed earlier this year in April after Covid debts in the country eased.

According to NIH data, 84 new cases of the virus were reported nationwide 24 hours ago and the positivity rate was 0.48 percent. About 109 patients received intensive care.