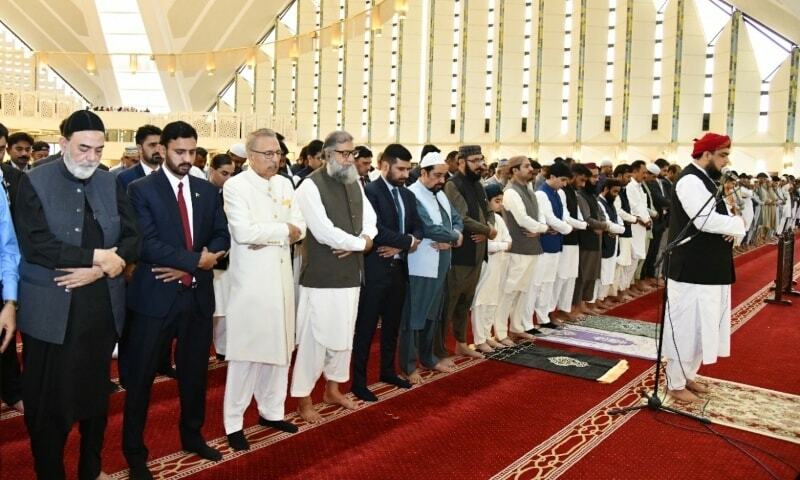 Pakistan on Tuesday celebrated Eidul Fitr with religious fervor and enthusiasm as the Covid-19’s specter that ruined festivals over the past two years has finally disappeared.

On Sunday, the Central Ruet-Hilal Committee announced that Eidul Fitr would be celebrated today as the month of Shawwal was not observed on Sunday. However, most Khyber Pakhtunkhwa, with the exception of certain areas, have already celebrated Eid yesterday (Monday).

According to Pakistan RadioEid congregations are held today in open spaces in mosques and Eidgahs across the country while mother emphasizes the importance of the day for Muslims.

Special prayers are offered for the progress and prosperity of the country and the welfare of the Muslim community around the world.

The main Eid prayer was held at the Faisal Mosque in Islamabad where President Dr. Arif Alvi and senior officials and delegates from Islamic countries offered their prayers.

A radio presenter added that about 25,000 Eid congregations were held in Punjab and close to 4,000 in mosques, imambargah and open spaces in Lahore.

Strict security arrangements were also in place to prevent any serious incident involving 43,000 personnel deployed in the province while 5,000 police officers were stationed in Lahore.

Likewise, prayers were held at KP venues celebrating Eid today, which include Malakand, Hazar and Dera Ismail Khan section. More than 190 Eid congregations were held in Quetta with the largest on Eidgah Toghi Road.

Addressing PML-N staff after the Eid prayers, the prime minister expressed his determination to overcome the current economic challenge with the support of coalition partners in government.

“Pakistan is currently under a lot of economic pressure, but there is no need to worry, as they are under joint responsibility, they and the support of other allies will not leave any stone unturned to address these issues,” he said.

The Prime Minister also indicated that he would soon address the nation and explain the challenges.

He also prayed to God that a happy Eid day would be a sign of progress and prosperity, allowing the country to deliver the country from a difficult situation.

The Prime Minister also noted that the government will have to end this journey towards prosperity and progress with “dedication and hard work combined with integrity”.

He assured the country that under the leadership of PML-N supremo Nawaz Sharif, the government will resume the journey of “rapid progress and progress hampered in 2018 by an inefficient government that undermines the economy”.

The Prime Minister also thanked the people and staff of the organization for their unwavering support of the PML-N leadership over the past four years. “The Sharif family and the leaders of the PML-N will never forget your support,” he added.

In a separate message, the Prime Minister said Eid is more than a special day and instead, it is “a special event of unparalleled unity”.

He said it was a day of hugs and smiles as he conveyed his best wishes to people and Muslim communities around the world for Eid.

In his Eidul Fitr message, President Alvi said he prayed that the day would be a cause for joy in Pakistan and the Islamic world.

“The real joy of Eid can only be found when we share our happiness with others,” he said.

PPP Chairman and Foreign Minister Bilawal Bhutto-Zardari, meanwhile, said residents of Kashmir living in India should not be forgotten on this day. “The people of IoK are still facing Indian pressure on this Eid and are paying the price for the liberation struggle in the world’s largest prison,” he said.

He also mentioned the plight of the Palestinian people, who said they spent another Eid under the “oppressive shadow” of Israeli violence. FM Bilawal said Eid worked to unite Muslims around the world.

The foreign minister indicated that this was the first Eid after “the liberation of Pakistani Muslims from the anti-apartheid government (PTI government)”.

Interior Minister Rana Sanaullah prayed for Pakistan to be protected from all forms of evil and said the government would try to make every day a “people’s Eid” by providing public service.

Climate change minister Sherry Rehman said it was a day to “spread the word”.

At this time, Imran wished the people of Pakistan well in this country and abroad for the event and said, come to the next Eid, “we will be on the road to true freedom.”

PTI leader Asad Umar hoped the day would give the government time to demonstrate and “understand that political unrest will not be resolved by filing false FIRs (initial information reports) or false video threats”.

Meanwhile, the Chief of Staff of the Army (COAS) Gen Qamar Javed Bajwa spent his Eid with the troops in Dungi, Kotli near the Control Center, according to Inter Service Public Relations (ISPR).

He offered prayers with the military and special prayers were offered for Pakistan’s security, peace and stability.

“COAS also shared Eid forces with officials and men. COAS reimbursed all martyrs and their families for their contribution to peaceful Pakistan,” ISPR said.