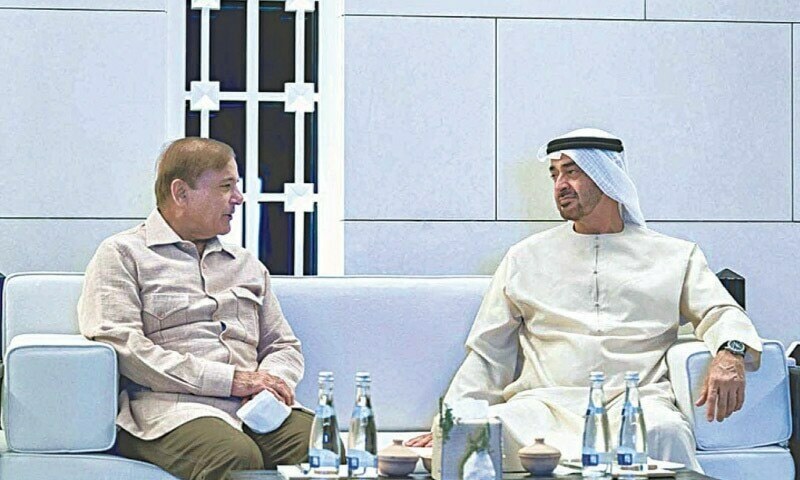 A team of economists from the United Arab Emirates has met with Prime Minister Shehbaz Sharif and announced a decision to strengthen “bilateral economic cooperation” between the two countries, especially in trade, energy, infrastructure and petroleum.

The delegation arrived in Pakistan on May 3 to discuss the implementation of resolutions by the Pakistani and UAE leaders during the prime minister’s visit to the Middle East.

According to a statement issued by the Office of the Prime Minister, at a meeting with experts on Tuesday, PM Shehbaz said Pakistan was adhering to “the priorities of its fraternal relations” with the UAE and wished to “strengthen relations at the next level, especially economically”.

“This high-profile visit during the Eid holidays reflects the UAE Government’s interest in investment in our country,” the report added.

“Pakistan warmly welcomes this act of brotherhood and looks forward to receiving significant investment from the Emirati brothers.”

The statement added that both sides agreed to strengthen economic cooperation between the two countries including trade, energy, infrastructure, petroleum, and other key sectors. They also agreed to stay close to “implement investment and trade decisions made at the leadership level”.

The prime minister hosted a dinner for delegates that night.

PM Shehbaz is visiting the UAE on his return from Saudi Arabia. During his visit to the UAE, PM Shehbaz met with Sheikh Mohamed bin Zayed Al Nahyan, Prince of Abu Dhabi and Deputy Chief Executive Officer of the UAE.

They discussed advancing the old relationship between the two countries, and the hope of further cooperation in the various sectors.

The two sides have reviewed a number of regional and international issues of concern, according to the Emirates News Agency.

The meeting was held at Qasr Al Shati Palace where the prince of Abu Dhabi wished PM Shehbaz success in leading Pakistan to progress and prosperity in the future.

PM Shehbaz was visiting the UAE on his official return to Saudi Arabia, his first prime minister.

He conveyed his warmest wishes and Eid greetings to the patron saint of the holy mosque, King Salman bin Abdulaziz, and to the people of Saudi Arabia, according to a statement issued by the PM’s Office.

“Recalling his co-operation with the crown prince during the visit, the PM reaffirmed Pakistan’s desire to further strengthen the historic relationship with Saudi Arabia and further enhance relations between the two countries at all levels,” he said.

The prime minister also emphasized his commitment to implement the decisions made in his recent meeting with the Saudi prince.

“The Royal Highness Crown Prince warmly responded to the Prime Minister’s Eid greetings and conveyed his greetings and best wishes to the people of Pakistan,” the PM’s Office said, adding that the Saudi prince reaffirmed his desire to work closely “to expand and divide the two countries. “.

He, the report added, also emphasized his decision to follow up on the understanding reached on the Prime Minister’s visit to Saudi Arabia.