PM Shehbaz assails Imran in NA speech, says ‘poison’ against institutions must be clamped down – Pakistan 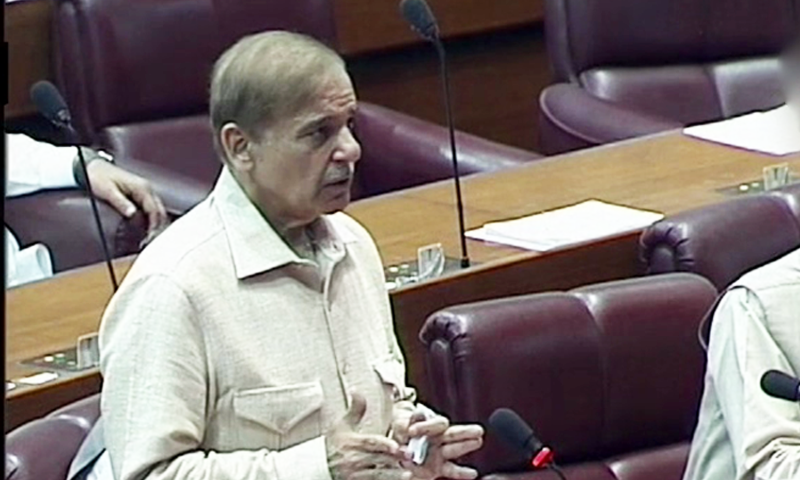 Prime Minister Shehbaz Sharif on Monday criticized PTI chairman Imran Khan for his comments on state institutions and said action should be taken against them within the law and the Constitution.

Imran, while speaking at a public rally in Abbottabad on Sunday, told the stories of Mir Jaffar and Mir Sadiq. Former prime minister Sirajud Daula, governor of the Mughal dynasty, whose chief minister, Mir Jaffar, had conspired with the British to overthrow the government.

He said his government was ousted “through Mir Jafars and Mir Sadiqs today”. PM Shehbaz criticized the comments yesterday and vowed to take action.

“The poison he sprayed on the center yesterday is a conspiracy against Pakistan. If this is not determined by the law and the Constitution then God will not allow this country to be a bad image of Syria and Libya where cities are displaying graveyards today.”

The prime minister claimed that Imran had “blue eyes” at the institution and was “fed on milk as a child”.

Without fear I want to say that in 75 years, this institution has never supported any government or prime minister as it did in Imran Khan.

“It was unfortunate that even though he did not learn anything, he did nothing and did not work for the nation. No example has been found of this kind of support and it will never be available again, ”said Shehbaz, adding that at least 20 percent. up to 30pc of that support was provided to PPP or PML-N governments so “by owning this country [taking] go as the plane flies. ”

The prime minister reiterated that if Imran’s views were not enforced, “nothing would be left” and there would be a crisis in the country.

He slammed the PTI chairperson for taking the country to a point where democracy could be eradicated.

PM Shehbaz also criticized the PTI government on economic issues such as arranging for oil and gas supply, maintaining power stations, managing the budget deficit and taking out loans. He said he had “secured future generations” with the number of loans he had taken out.

The prime minister also dismissed Imran’s claims about the Cablegate case and said that the Pakistani ambassador at the time in the US had allowed threatening language to be used in the letter but “where did this conspiracy come from?”

PM Shehbaz said threats were made in Pakistan in the past and that Pakistan and India always issued threats to each other “but is it a conspiracy?”