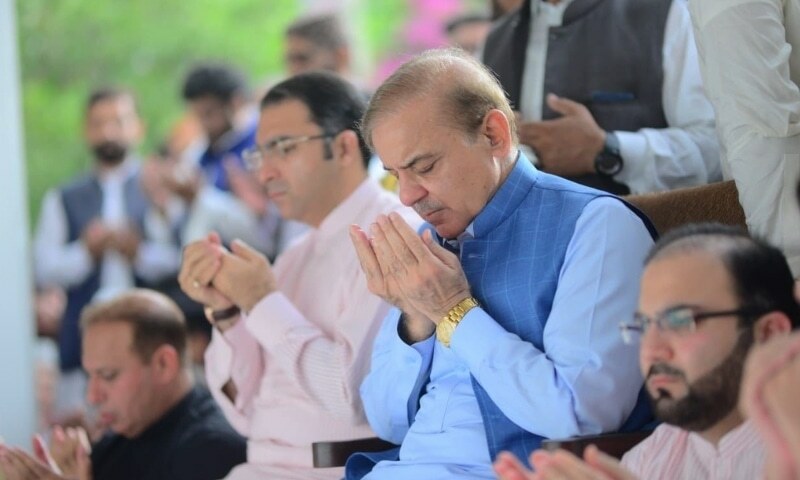 Prime Minister Shehbaz Sharif on Wednesday “strongly opposed” the closure of the Eid prayer rally by Indian authorities in parts of Jammu and Kashmir.

In a phone call with Azad Jammu and Kashmir Prime Minister Sardar Tanveer Ilyas earlier today, PM Shehbaz reaffirmed Pakistan’s commitment to continuing to increase moral, political, and political support for the people of Kashmiri until they gained independence, a statement said. Pakistan Radio he said.

According to Indian news online PublicationAuthorities did not allow Eid prayers in the history of the Jamia Masjid in the Nowhatta area of ​​Srinagar after the steering committee refused to accept the conditions imposed by the authorities.

The authorities have requested that the governing body conduct these prayers before 7:00 am and promise to maintain peace and order during and after the meeting.

For now, Hindustan times a report on no prayer was held Tuesday in Srinagar Eidgah, where thousands of people gathered for Eid prayers.

PM conveys Eid greetings to the President, Commander-in-Chief of the Armed Forces

On Tuesday, the prime minister telephoned President Dr Arif Alvi, service chiefs, ministers of all provinces, leaders of the Pakistan Democratic Movement (PDM), and senior politicians and greeted them on Eid.

The day after holding similar telephone conversations with the leaders of the Islamic world, the prime minister extended his warmest wishes to the local leaders by discussing the political situation in the country.

He has spoken with Sindh’s prime ministers, Khyber Pakhtunkhwa, and Gilgit Baltistan, as well as the acting governor of Balochistan. PM Shehbaz, however, was unable to speak to the Balochistan prime minister as he was later traveling abroad.

Restrictions on freedom of speech undermine Pakistan’s image, ability to progress: US – Pakistan

Restrictions on freedom of speech undermine Pakistan's image, ability to progress: US - Pakistan