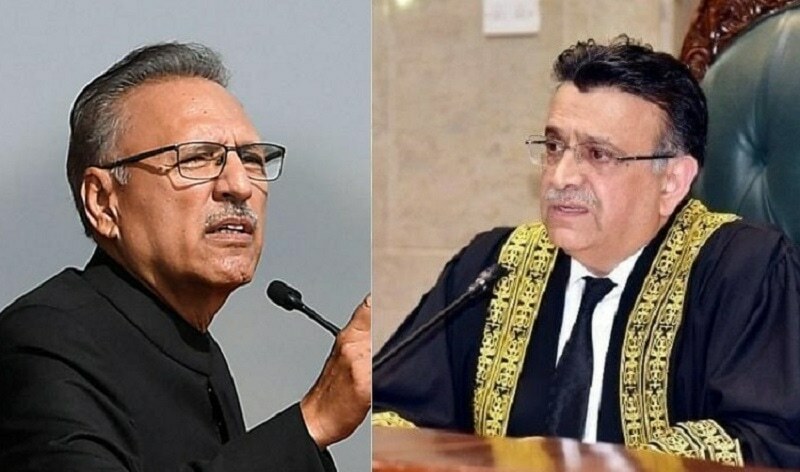 President Dr Arif Alvi on Thursday wrote a letter to Pakistani Chief Justice Umar Ata Bandial, urging him to set up a commission of inquiry to investigate “conspiracy to change regime”, claiming that former prime minister Imran Khan had been fired.

A letter from the president to the chief justice comes less than two weeks after Imran wrote a similar letter to the president and CJP Bandial, requesting a public inquiry and the establishment of a legal commission to investigate the “letter of intimidation”.

In his letter today, Dr Alvi advised the CJP that the proposed judicial commission should be led by him and that he should conduct open interviews to “fully investigate allegations of change of government to prevent the country’s political and economic crisis”.

The president said the world had seen many examples of “regime change” in which activities were carried out by conspiracy to change a particular government and those plans were later confirmed by the disclosure of confidential documents.

He lamented that the disclosure was only made when the territories of these countries were severely damaged by illegal interventions.

Emphasizing the importance of the commission, the president warned that there would be a major political crisis in Pakistan, saying that deep divisions were taking place politically and among the people of Pakistan because of recent events.

“It is unfortunate that the quotations are quoted without context, misunderstandings are raging, opportunities are being lost, unrest is raging, and the economy is in crisis, while the world situation is close to a potential political crisis. they can burn at any time, ”he said in the letter.

Dr Alvi pointed out that the Supreme Court had taken similar steps in the past to establish court commissions on issues of national security, integrity, governance and public interest.

“The legal commission, led by [former] Chief Justice Nasir ul Mulk, along with two other high court judges, questioned allegations of fraud in the 2013 election. Similarly, court commissions were established to investigate the matter of Memogate, and in addition, the court commission is also currently operating on the missing persons, led by a sitting judge ”, he noted.

He cited media reports as saying that the prime minister had also expressed his desire for a commission.

The president said the country had treated the Supreme Court with respect and “expected it to meet expectations”. He added that the commission should investigate the matter “not only based on legal expertise, but on the spirit of justice”.

Dr Alvi said the judicial commission would be “a great service to the country as people need to be clarified”.

“Who knows better than your Honor that it is proof that a ‘cigarette gun’ is identified in the hand of a conspirator, or to find a way to make money, or to identify meetings where people have been encouraged to take action, or people have been bought and sold, can be a daunting task.” he added.

The president has noted that he had a strong impression that having “written evidence” could lead to certain decisions based on legal expertise but on the true spirit of justice.

He cited incidents such as the assassination of former prime minister Shaheed Liaquat Ali Khan, the Agartala Conspiracy case, Zulfiqar Ali Bhutto’s publicity letter and allegations of conspiracy, the plane crash of President Ziaul Haq, the Abbottabad incident and many others that, he said, remained uncertain.

He regretted that people were accusing and strongly believing in explicit but “unfortunate” unsubstantiated conspiracies.

Dr Alvi called on the proposed court commission to conduct a thorough and thorough investigation into the government’s transformation plan.

A conspiracy to change the rule: The way everything happens

The controversy surrounding the no-confidence motion by former prime minister Imran Khan took a turn for the worse when the disgraced PM wrote a letter to the March 27 meeting – days before his dismissal – claiming it contained “foreign conspiracy” plotted to overthrow him. his government.

Imran kept my mother informed of the contents of the letter when she first opened it but spent days later hating the United States when the exit from her government seemed imminent.

Imran’s allegation that the US was leading his exit from power was based on a received message from Pakistan’s US Ambassador to the US, Asad Majeed, in which the envoy reported on a meeting with Assistant Secretary of State for South and Central Asia Affairs Donald Lu.

Majeed said Donald Lu had warned that Imran Khan’s tenure in office, which would face a vote of no confidence, would have implications for bilateral relations. The US was said to be angry with Imran over “independent foreign policy” and a visit to Moscow.

The Pentagon and the State Department have repeatedly denied the allegations, saying there is no truth in them.

The National Security Committee (NSC), which includes all service chiefs and the head of Pakistan’s top intelligence agency, took up the matter on March 31 with then-prime minister Imran Khan in office. The forum decided to remove the “strong border” from a country that did not call it “a clear disruption to Pakistan’s internal affairs”.

It also called the intervention “unacceptable under any circumstances” and said the language used in communication was not ambassador.

While the forum had ceased to call for interference at the time, another NSC meeting was held on April 22 with newly elected prime minister Shehbaz Sharif, and included the same military chiefs who attended the 31 March session.

During the second meeting, the NSC statement said it “reaffirmed the decisions of the last NSC meeting” and clearly went on to add that it had not received any evidence of foreign conspiracy.