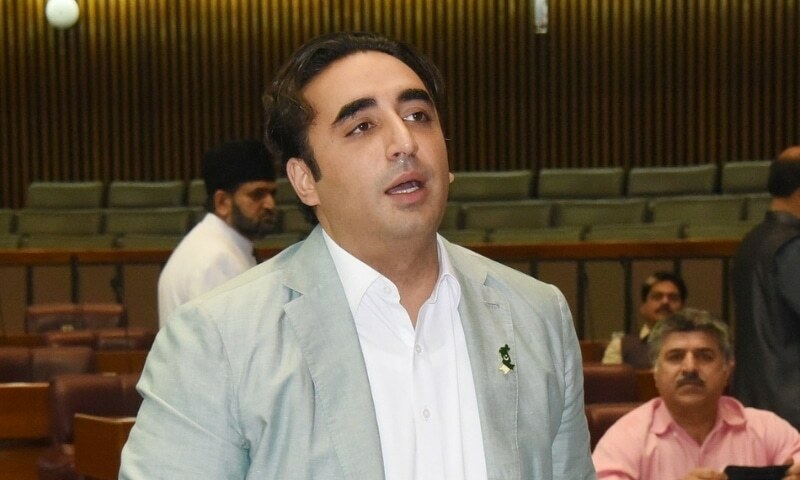 Foreign Minister Bilawal Bhutto-Zardari on Thursday claimed that the night before the National Assembly (NA) passed a motion of no confidence in former prime minister Imran Khan, one of his ministers threatened to boycott early elections or face war.

“I would like to share this house the night before the no-confidence motion [was passed]I was sent a message, threatening to accept the election immediately or face the war law, “he said under the NA, adding that the threat was passed on to him by a government minister through a colleague.

Bilawal went on to say that the threat was an attempt to undermine the motion of no confidence in the former prime minister who, without provoking the PTI, succeeded in terms of the rule of law and the Constitution.

He went on to say that Imran and the PTI adopted a similar plan in which they tried to create political instability and carry out a reckless attack to make it one of two things: a previous election without the necessary reform or a non-democratic action. .

“We must all make an effort to put an end to this conspiracy. We will all have to work together to end this scourge and save the country.

Bilawal also made clear his party’s policy on the future of the country, saying “first reform, followed by election”. The minister said the party does not believe in political engineering and wants free and fair elections.

“This has always been our place.”

He explained that the re-election process was a two-step process, in which first “undemocratic” cases and regulations passed during the PTI administration should be scrapped before any new law could be passed.

“We will have to sit down and discuss the electoral reform we want to bring. [there is] communities, the Free and Fair Election Network (Fafen) and many other communities we can talk to […] to ensure that what happened in the 2018 election does not happen again.

He added that the country’s political parties were in agreement with the Charter of Democracy (CoD) – a 36-point document signed by the PPP and PML-N in May 2006. The foreign minister said that while there is work to be done to implement the CoD and a long way to go before such a second document can be made, there must be at least a “minimum code of conduct”.

“There should be a minimum code of conduct for existing and non-existent parties, which begs the question: What kind of politics do you want to do?”

He called for all political parties to be included in the code of conduct, warning that failure to do so would lead to “bloody” elections.

“Polarization is evident in this country […] if all political parties do not agree on a basic code of conduct before the next election, then our next election will be a bloody one.

Bilawal calls for the establishment of a parliamentary inquiry board

During his speech, the foreign minister again turned his shotgun on himself when apprehended by a police officer on the basis of his conduct. against Imran for calling it anti-Clause 5.

“The situation in Pakistan is at a critical juncture. There is no doubt about it,” he said, noting that all institutions in the country had been embroiled in controversy over the whims of the former prime minister.

He alleged that instead of dealing with the distrust of democracy, Imran resorted to violating the Constitution and attacked democracy when it came out.

“All these people, the former prime minister, deputy speaker, president, on the night of April 3, the night of April 9 and 10 and from April 10 to date, violated the Constitution and they refused to follow it. […] how can it ignore such an attack NA? “

He emphasized the need for the PPP to establish a high-level parliamentary committee / committee to investigate the allegations leading to a motion of no confidence and all that has taken place since then. The minister called for the “attack” to be considered in order to expose those involved.

“As of April 3, the Supreme Court has made it clear in its ruling that there is no constitution. But the way the court orders were rejected. […] the people of Pakistan are waiting to respond. “

Bilawal insists that we need to get to the bottom of these issues in order to strengthen democracy and restore the dignity of the lower house of parliament.

He said because the incidents were ignored and no action was taken, the former prime minister considered himself a “holy cow”. “He travels around the country and presents himself as a holy cow, and acts in a way that goes against the interests of the nation, our Constitution and our international standard.”