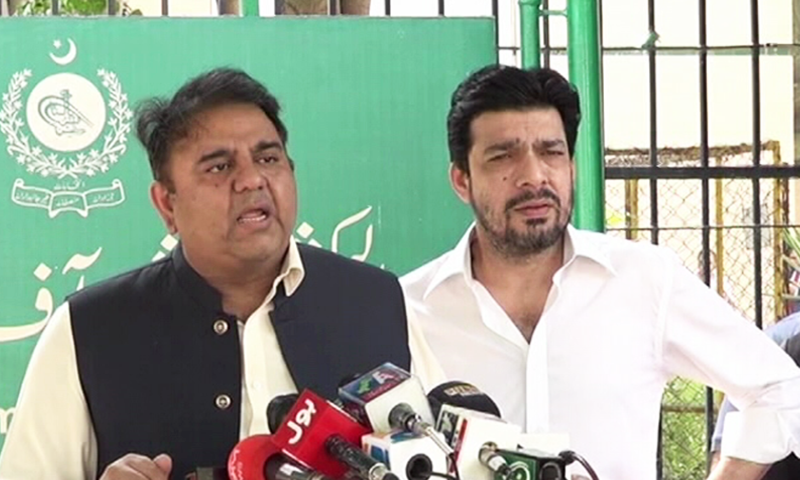 The announcement was made by former information minister Fawad Chaudhry, who said “Pakistan’s largest political party has lost faith in him. [CEC]”.

Chaudhry, who spoke to the media outside the Pakistan Electoral Commission (ECP) and PTI leader Faisal Vawda, said “the biggest reason behind the political crisis facing Pakistan today is that the electoral commission does not function as a center”.

He said it was the duty of institutions to “maintain order in the country … and they fail to do so because their employment is not based on their responsibility”.

Chaudhry said PTI boss Imran Khan had suggested that “the CEC could take over the PML-N”, meaning that Raja was interested in PTI and liked the ruling party.

“When the country’s top leadership, the biggest party, loses trust, the honorable thing is to resign, you admit that … you cannot continue to work if the leaders do not trust you and recommend the replacement of a new person. But unfortunately, what happened was the opposite, “he regretted.

“And this election commission is incomplete – without members from the Punjab and Khyber Pakhtunkhwa and as such, it does not represent about 70 percent of the population of Pakistan – a party that opposes the country’s political leadership,” he added.

In such a situation, Chaudhry continued, the PTI way forward was to continue its political struggle and start a “legitimate struggle”.

Therefore, he said, the party plans to file a referendum against the CEC in the Supreme Court of Justice. “Because no CEC can run its office properly [this] The CEC has run its office. “

Chaudhry said Faisal Vawda, “who has been a victim of ECP corruption”, decided to file a referendum on Sindh watchdog member Nisar Ahmed Durrani.

The right to vote for Pakistani people abroad

He also criticized the current government for “daring to take away the right to vote for Pakistanis abroad”.

“A plot was hatched to deprive nine million Pakistanis of this right, and we are vehemently rejecting it,” he said.

The PTI leader added that it was indeed remittances sent by Pakistanis overseas that kept the country’s economy afloat.

Expressing concern over the economic downturn, Chaudhry stressed that the value of the US dollar had risen to R190 and that the stock market had seen a decline.

“Pakistan’s economy is doomed, and it fears it could collapse like the Sri Lankan economy. This is the confidence that this ‘crime minister’ and his cabinet have provided,” the PTI leader noted, referring to Prime Minister Shehbaz Sharif and his party.

He has sharply criticized Finance Minister Miftah Ismail over his economic policies and Interior Minister Rana Sanaullah for “trying to run the government through threats”.

“And FIA (Federal Investigation Agency) personnel were dispatched to the homes of journalists, political opponents and anchorpersons at 2am,” he added.

He also criticized the government for removing the names of its ministers from the list of non-partisans and “changing the prosecution parties” accused of it.

Chaudhry also criticized PM Shehbaz on his trip to Saudi Arabia, saying the prime minister was accompanied by 84 members of his family.

“All the costs of the PM House that Imran Khan was able to save, they spent on one trip,” he said, adding that there was public outcry against the current government.

Addressing the PML-N delegation – currently based in London and comprising the prime minister and senior cabinet members – a meeting of the Nawaz Sharif faction, Chaudhry said the development proves that “the Pakistani political system is being held in London”.

He also criticized the Muttahida Qaumi Movement-Pakistan, calling it a “criminal thing”, which was linked to MQM supremo Altaf Hussain and “against the security forces who sacrificed their lives”, and was restored to power.

He stressed that if the election had not been announced before May 20, “a worse situation than in Sri Lanka” could develop because the population of Pakistan was much larger than in South Asia.

Chaudhry said the “political crisis” could have been resolved if the cases against the opposition representatives had been decided by the Supreme Court and the ECP.

Asked about PTI criticism in the courts and institutions, Chaudhry said everyone trusts institutions and any criticism or appreciation of those people in them.

He said judges should take care to implement the principle that their comments should not be published in the media by name in order to avoid facing political criticism. Chaudhry said political cases were obligated to invite dialogue so that “the heart is open to criticism”.

The former information minister was asked about his views at yesterday’s PTI conference in Jhelum, where he called on “gatekeepers” to do their job and let the country go to the polls.

Chaudhry said the PTI was ready to “coordinate” institutional relations and play a role in “reforming the country”, adding that all institutions should play their constitutional role.

He further added that elections were “the only solution” in the current context.

Meanwhile, Vawda, who did not qualify for the ECP election because of his non-disclosure of his American citizenship during the 2018 elections, said everyone was a witness to the “fraud and injustice” inflicted on him.

“The ECP is the political wing of the PML-N,” Vawda said.

Explaining the direction given to an ECP member from Sindh, he alleges that Durrani favored a political party and became the principal of Sindh Law College while holding office in the constitution.

He said Durrani’s case had been heard in the high court and that there was evidence in the matter.

The PTI leader also warned that the “next press conference” would be about an ECP member from Balochistan.

“The CEC who is the leader of all this … is preparing a statement against him and going to the Supreme Court with evidence.”

Vawda also questioned the failure of the ECP’s action in the various political cases in the current coalition government.