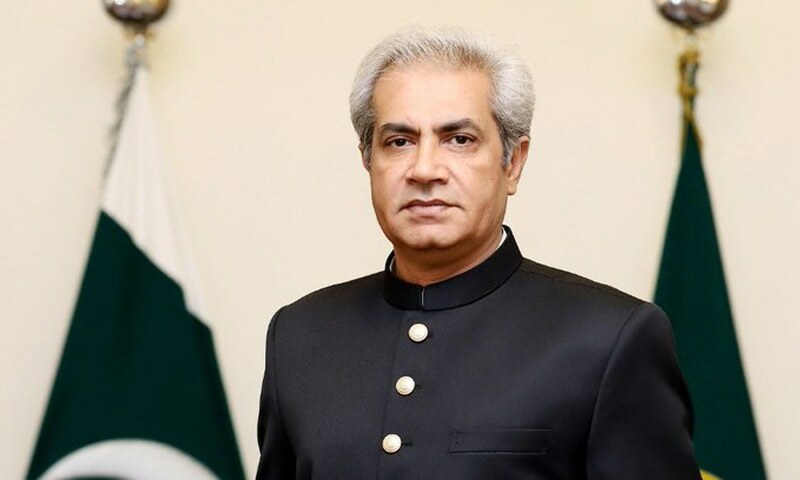 LAHORE: The coalition government, in a very late-night proclamation, announced that Punjab Governor Omar Sarfraz Cheema has resigned from office with the advice of the prime minister sent to the president on April 17 and ratified on May 1.

A busy day concluded with a Cabinet announcement, President Dr Arif Alvi had earlier rejected Prime Minister Shehbaz Sharif’s suggestion to remove the Punjab governor – dampening the PML-N’s hopes that the office would be vacated in a day or two.

Dr Alvi rejected the premier’s summary using Article 101 (3), stating that the governor would hold office “during the president’s” pleasure “(as the president wishes).

The PTI camp believed that the Constitution was clear in terms of Section 101 (3) read with Article 48 (2) that “the president shall act at his discretion in any matter authorized by the Constitution to do so. ”.

The governor of Punjab, Omar Sarfraz Cheema, also announced the bank in points 101 (3) and 48 (2) which he referred to in several tweets, saying the implementation of the prime minister’s advice automatically starts after a time when the president has to take action. expired, but not in the case of the removal of the governor.

Earlier in the day, PML-N’s Interior Minister Rana Sanaullah had advised Governor Cheema to return home politely and to ensure that he and President Alvi did not engage in any activity that would lead to public outrage in the coming days. “The president is obliged to take the advice of the prime minister, and any deviation will be tantamount to violating the Constitution,” he said.

Observing the government strike, Governor Cheema had tweeted that the “Sicilian mafia” had arrested the House Governor and was “ready to attack the office with a summary and unconstitutional notices”.

A federal government notice also stated that the speaker of the Punjab Assembly would perform the duties of governor until the appointment of a substitute, in accordance with Article 104 of the Constitution. This development not only changes the situation in the House of Governors, but also in the Punjab Assembly as Speaker Chaudhry Parvez Elahi will have to resign from his post to act as acting governor, and Deputy Speaker Dost Muhammad Mazari was said to be leaning towards the PML-N.

Both the speaker and the deputy speaker are facing charges of mistrust of the House.

Earlier on Monday, a Twitter presidential official wrote Monday: “The President has told the Prime Minister of Pakistan that Governor Punjab cannot be removed without his consent.”

In an article rejecting the premier’s advice, the president wrote that the incumbent governor could not be removed as there was no charge of misconduct or conviction of any court of law or of any act committed by him that was unconstitutional. “It is my duty as Head of State to represent the unity of the Islamic Republic of Pakistan in terms of Article 41 of the Constitution,” the president said.

As the removal of the governor-appointed PTI was delayed with each passing day, the PML-N-led coalition government in Punjab was alarmed as it was unable to form a provincial cabinet. The PML-N has delayed the formation of a cabinet since Hamza Shehbaz swore in the prime minister’s office on April 16, fearing that Mr Cheema would not take the oath of office.

The governor refused to take the oath of office in Hamza against the advice of the Lahore High Court, which later ordered the speaker of the National Assembly to do the job.

The president in his address to the prime minister also highlighted the role of the constitutional governor, saying that Mr Cheema had sent him a report on serious incidents at the Punjab Assembly, questioning the legitimacy of the resignation of former prime minister Usman Buzdar, and changing credibility. Oppressive PPAs of PTI.

Rejecting PM Sharif’s advice, President Alvi said he was confident the removal of the governor would be unfair and in violation of justice. He emphasized the need for the current governor to continue to promote and promote a healthy and clean democratic system in which members were not coerced or bribed to bring about illegal change, and Article 63A of the Constitution especially encouraged such activities.

The president reiterated his commitment to uphold the provisions of the Constitution in these difficult times, and strongly rejected the prime minister’s proposal to remove the Punjab governor.

This time, following a warning from Interior Minister Sanaullah, Governor Cheema took to Twitter to express his fears that the “Sicilian mafia” was ready to attack his office with an unconstitutional summary and notices.

In a tweet later that night, he wrote: “The shocking and disturbing reports of the state attorney and the minister of the interior may lead to civil war. Both have proven themselves to be royalty, giants of Raiwind palace. ”

He went on to say that he was able to control the situation when the Governor of the House was “arrested”, but warned that the “attack” again the results would be different and a civil war could break out. Cheema went on to say that the prime minister, the interior minister, the attorney general and the “illegal” prime minister of Punjab would be held accountable in such a case.