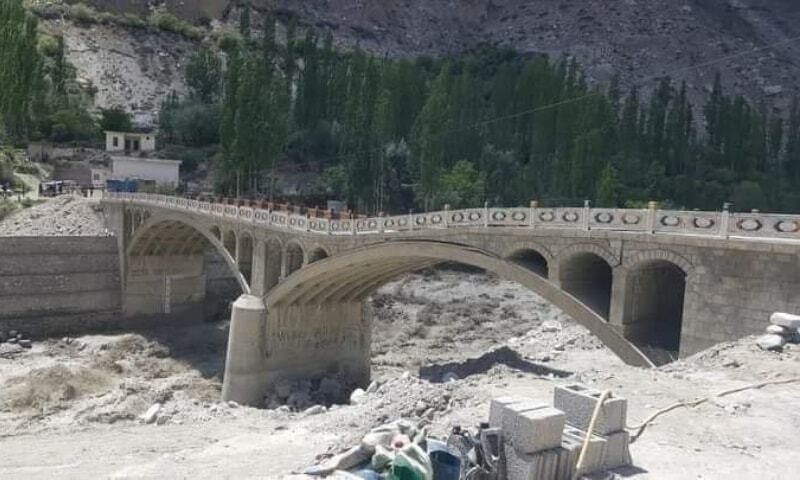 Hassanabad’s Hunza bridge on the Karakoram road was destroyed on Saturday and was swept away by the GLOF from Shishper Glacier.

Gilgit-Baltistan tourist police have confirmed the development, adding that traffic has been diverted along Sas Valley Road.

Hunza Superintendent of Police (SP) Zahoor Ahmed said the glacier started melting on Saturday due to heat and caused flooding that damaged the bridge and made it inoperable in traffic.

He said tourists were facing difficulties and were given alternative routes through Ganish and Murtazabad. He added that tourist police officers were also deployed at various locations to prevent any disruption to tourists.

The SP said families close to nullah had been relocated to safer areas and the entire administration, including police and rescue services, were alert due to the emergency.

Gilgit-Baltistan General Secretary Mohyuddin Ahmad Wani said the National Highway Authority (NHA) and the Frontier Works Organization assured him that the bridge would be repaired immediately.

The Secretary-General has instructed GB Home Secretary Iqbal Hussain, Gilgit commissioner and the deputy district commissioners concerned to take immediate steps to restore the Hassanabad bridge and resolve the disruption caused by passengers.

According to information from the secretary general’s office, the provision of facilities and fuel to tourists is also guaranteed and rehabilitation and nutrition to affected families.

He added that two Hassanabad power stations were also flooded.

Climate Change Minister Sherry Rehman has warned that many areas are at risk of GB and Khyber Pakhtunkhwa. “Pakistan has the highest ice cap outside the small area and most are losing weight due to global warming,” he said.

Rehman had previously warned provincial disaster management officials and local departments that due to rising regional temperatures, there was a possibility of GLOF incidents and floods in GB and KP.

Foreign Minister Bilawal Bhutto-Zardari also said the melting of the ice was “a matter of concern”. He said concerted efforts at the international level were needed to combat climate change.

“The situation from the lake eruption in Shishper Glacier needs to be addressed urgently. The government must ensure that local communities do not show up in any way and that the world’s roads remain open.

I hope the management will make sure that ordinary people and tourists do not face adversity, said FM Bilawal.

GB Environmental Protection Agency Director Shahzad Shigri said climate change had accelerated the melting of ice in the region and posed a serious threat to civilians.