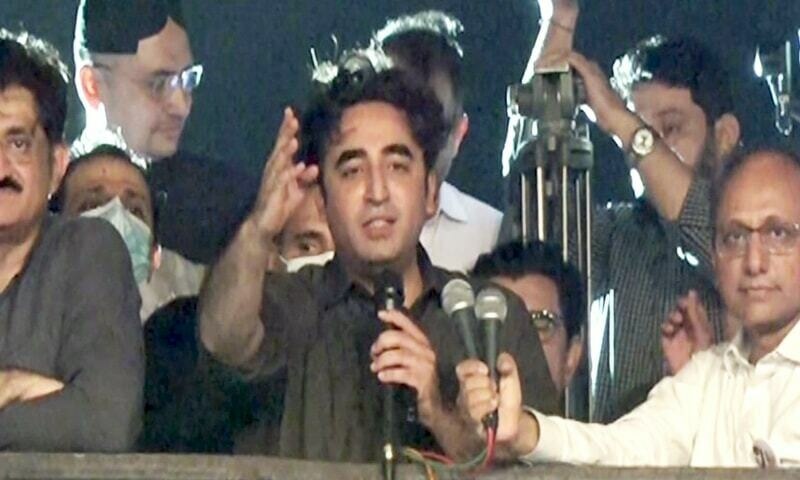 Foreign Minister Bilawal Bhutto-Zardari on Sunday said it was time to make “difficult decisions” so that Pakistan could benefit from the current economic crisis.

“Now is the time for us to make those difficult decisions in support of the country to get it out of the economic crisis,” the foreign minister said at a conference in Karachi. Bilawal appeared to be referring to the fuel price hike decision, which has been delayed by the government.

“We need to make those difficult decisions that we can use to get the economy out of the crisis [Imran] Khan, ”said the PPP chairperson, adding that solutions can be found through co-operation.

Bilawal said the nation was facing “war” issues and difficulties and that various political opponents had joined forces in a “unity government” to take responsibility and resolve them.

He explained that personal and political differences were forgotten in difficult times for the sake of “national interest”. FM Bilawal added that allied political parties will pursue reform and work hard to bring relief to the people.

Earlier today, Finance Minister Miftah Ismail said the government was not raising petrol prices “for now”, returning to the important pre-condition set by the International Monetary Fund (IMF) to restart its loan program.

Analysts and experts have criticized the new coalition government for destroying investor sentiment by failing to come up with a credible strategy for making difficult political decisions to improve the economy. The government’s biggest drag was the withdrawal of funding for fossil fuels and energy, which is an ‘initial step’ the IMF wants to take before it can agree to restart funding.

However, since taking office, Prime Minister Shehbaz has repeatedly rejected the removal of petrol subsidies, indicating that the new government finds it difficult to make a decision that may be unpopular with his constituents.

‘A plot is hatched at Bilawal House’

The foreign minister said the plot to oust the PTI government was not initiated within the White House, as Imran’s claim was, but was planned within the Bilawal House.

Criticizing Imran, Bilawal dismissed the PTI chief’s claim that his government was ousted by foreign conspiracy under the United States order.

He said it was PPP’s efforts that led to the formation of the Pakistan Democratic Movement (PDM) – a coalition of former opposition parties.

“Forgetting our political differences, with other parties, we formed the PDM and on September 20, 2020, when we laid the foundation for the PDM, we made it clear that we would hold protests and protests and suffer in parliament and send the PTI government home with a vote of no confidence.” recalls Bilawal.

He said initially PPP allies did not agree on internal change but “in politics you have to convince everyone and it is the responsibility of the leader to show the way,” Bilawal said.

“So we have reassured others, shown them to our colleagues and made them realize that they should not resign from parliament. When our status was accepted, the elected government lost all vacant elections, proving that their powers were false and replaced.”

“The PPP is ready for elections as soon as we bring about electoral reforms and work on the Charter of Democracy,” FM Bilawal said at today’s rally.

He added that the PPP has already shown what it can do as a major political party in the country and will show in the future “what else can be done if we become the largest party in parliament”.

Criticizing Imran, Bilawal said the “lies and propaganda” of the prime minister would have to be fought. “Khan sahab wants forestry rule and he does not believe in the rule of law or democracy … but his attempt will ruin it and the people will succeed,” said the foreign minister.

He added that he would be held accountable for violating the constitution by the PTI chairperson, adding that a parliamentary commission would be set up in this regard.

The foreign minister criticized the incidents during Prime Minister Shehbaz Sharif’s visit to Saudi Arabia, when political slogans were handed over to members of his cabinet at the Prophet’s Mosque, adding that such “dirty politics” could not be tolerated.

Bilawal said Imran and the PTI should “ask [for] pardon ”for the events in Medina. He also criticized the recent PTI chairman’s remarks about” our institutions “.

“Imran is playing a dangerous game with the end of the country and the union, conspiring against the constitutional process.

“But we have thwarted Bani Gala ‘s plans before and this process will be successful as well. We will form a national government after implementing the reforms and elections,” said the PPP chairman.

He said the PPP would work hard on the reform and try to find solutions to the problems, especially at the foreign level. Bilawal called on his party to start preparing for local government elections and, finally, general elections.