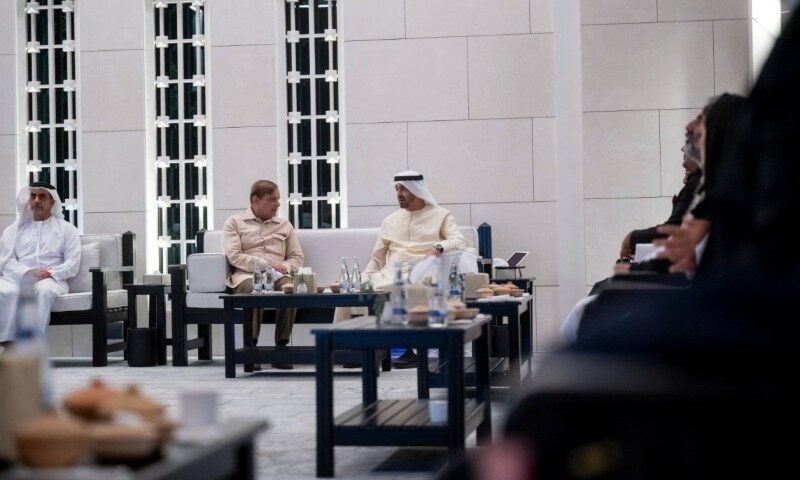 ISLAMABAD: To increase government support for economic stability in Pakistan, a team of United Arab Emirates economists is scheduled to visit the country on Tuesday (today) to discuss the implementation of resolutions by Pakistan and UAE leader during Prime Minister Shehbaz Sharif’s recent trip to the Middle East.

According to the Office of the Prime Minister, UAE economists will meet with PM Sharif in Lahore on Tuesday. The group will work with the government’s economic delegation and discuss ways to accelerate economic activities between the two countries.

The Premier will also host a delegation dinner to discuss economic and trade relations and investment promotion.

Delegates will be introduced to Pakistan’s investment climate. Discussions on cooperation in the areas of energy, economy and the petroleum industry are also on the agenda.

Prime Minister Shehbaz Sharif, who had just completed his first visit to Saudi Arabia and the UAE, conveyed Eid greetings on Sunday to the people and authorities of Qatar and Bahrain.

According to the PM’s Office, PM Sharif called on Sheikh Tamin bin Hamad Al Thani, the Emir of the State of Qatar, to greet him at the Eidul Fitr.

The Prime Minister also conveyed his best wishes to the people of Qatar.

The Qatari ruler warmly responded to the greetings and conveyed good wishes to the people of Pakistan.

The two leaders expressed satisfaction with the excellent state of bilateral relations, and decided to continue the strong political and economic co-operation that existed between the two countries. They agree to maintain close communication and work together on all issues of common interest.

The Prime Minister has invited the Qatari emir to visit Pakistan in advance. Sheikh Tamin extended an invitation to the prime minister to visit Qatar.

Mr Sharif reiterated that Pakistan appreciated its relations with Bahrain and expressed its determination to further strengthen bilateral co-operation in various fields.

He appreciates the steps taken by the Bahraini government to care for the Pakistani diaspora during the Covid epidemic.

Responding to Eid’s premier greetings and warm feelings for the people of Bahrain, King Hamad congratulated PM Sharif on his recent election and his inauguration. Reaffirming Bahrain’s commitment to expanding and strengthening cooperation between the two countries and Pakistan, he said he was looking forward to working closely with the prime minister to further this goal.

Prime Minister Sharif held a telephone conversation with Turkish President Recep Tayyip Erdogan on Monday and extended warm welcome to the government, leadership and people of Turkey in Eidul Fitr, according to the APP.

President Erdogan warmly responded to the Prime Minister’s Eid greetings and conveyed his special brotherly feelings and love to the people of Pakistan.

The two leaders expressed satisfaction with the excellent relations between the two countries and reaffirmed their commitment to advancing this relationship in all areas of mutual interest, especially trade and investment.

During his visit to Lahore on Monday, Prime Minister Sharif was briefed on the performance of the Pakistan Kidney and Liver Institute (PKLI). The premier has instructed the relevant authorities to provide free medical care to at least 50 percent of patients and to take steps to make them more responsible.

Mr Shehbaz was told that the PKLI had undergone 290 kidney and 190 kidney transplants last year. Of those, only 17pc was provided free of charge.

The Prime Minister was not happy with the PKLI’s performance and said it was designed to provide free implant services to the poor so that they do not have to travel abroad for treatment.

He has ordered the immediate completion of the Nursing University project and the provision of sanitation services.

Zulqernain Tahir in Lahore also contributed to this report