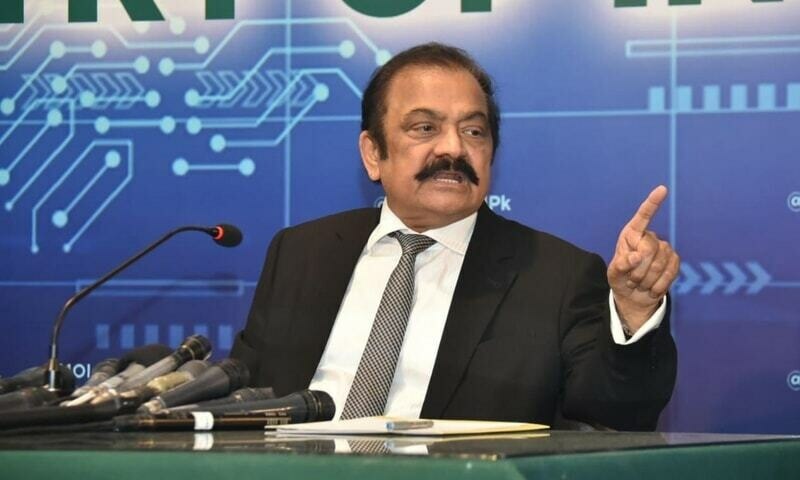 Interior Minister Rana Sanaullah responded on Tuesday to a statement from his predecessor Sheikh Rashid on Pakistani Tehreek-Insaf (PTI) chief Imran Khan who is ready to sit down with Prime Minister Shehbaz over the issue of previous elections, asking why he is “appealing to the government and institutions now” as he declared it decides when the time is right for the election. ”

In a series of tweets, Sanaullah said Imran had the authority to dissolve rallies and hold new elections while he was prime minister. He added that the current election would not be held before “responding [is conducted] to plunder the nation’s resources and make the country economically useless ”.

Rashid, one of Imran’s longtime allies who was part of the newly ousted government in the PTI, said during an interview with. An American voice on Monday that Imran was ready to hold talks with the Sharif government in the first general election, but wanted confirmation of “strong settlements”.

“Imran Khan does not want to shake hands with the leaders of the Shehbaz Sharif coalition government, but there could be discussions about the election if the establishment is guaranteed,” added the Awami National League-Pakistan.

He further added that he was making efforts to resolve the “misunderstanding” between the PTI and the establishment, and was of the opinion that the PTI should not be dealt with by any government institution. Instead, the party should have sat down with the Pakistan Electoral Commission (ECP) in order to convince the commission of previous votes, Rashid said.

Former interior minister has spoken out about a planned PTI march in Islamabad to force early elections.

“Imran Khan will mobilize millions of people in Islamabad and in that case the country will enter a state of uncertainty that could lead to civil war,” he warned.

Rashid expressed similar fears earlier today, when he told the media that the Islamabad PTI march could turn to “blood” and urged authorities to “find a solution before the long march”, on May 31.

He said he thought “a long journey” could turn to “blood” as part of a “conspiracy”, and that those who smoke could kill themselves.

Responding to the allegations, Sanaullah said on Twitter that “people like Sheikh Rashid want to create a situation of … civil war.”

But “his dream of a civil war will never be fulfilled … people will not be deceived by funny words,” Sanaullah added.

The interior minister also accused Rashid of being “intellectual” after a recent incident in Masjid-i-Nabwi, where a group of pilgrims had gathered at PM Shehbaz and his party and shouted slogans against them in a mosque.

The first informational report was written about PTI leaders, Rashid and many others, including the former nephew of Interior Minister Rashid Shafique – who has been arrested – under blasphemous laws over the incident.

Sanaullah said in his tweets the Sheikh and other PTI leaders plotted during the first 10 days of Ramazan at the Jeddah hotel which led to the Prophet Mosque event.

“Driven by your pride and despair, you did not save your nephew. You are celebrating Eid in Rawalpindi and your nephew is in prison for your conspiracy,” Sanaullah said.