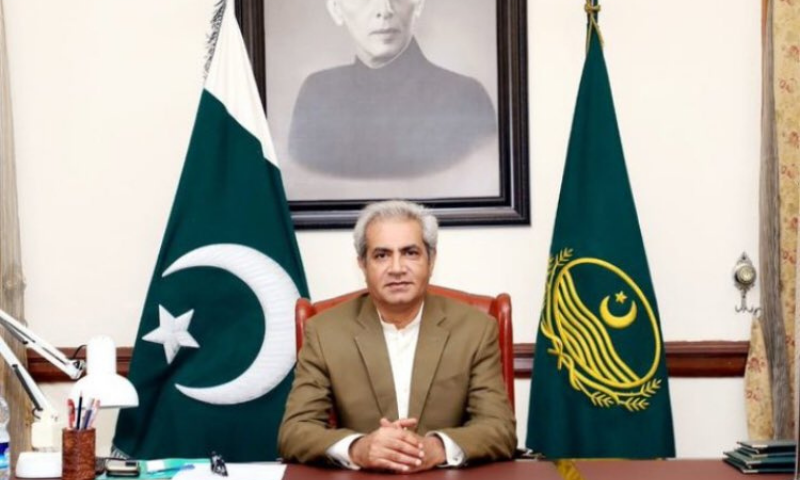 Punjab Governor Omar Sarfraz Cheema said on Thursday that if Chief of Staff Gen Qamar Javed Bajwa had given him one subedar and four clauses, he would arrest Prime Minister Hamza Shehbaz, who said he was “illegally, illegally and illegally”. and throw him into prison.

In a series of morning tweets, he said the province, which was facing a constitutional and legal crisis, had “been forcibly taken” and called for the silence of political parties “very closely related”.

If everyone embraces Hamza Shehbaz’s “formula” as prime minister in Punjab, other provinces should start to worry, he added.

In a subsequent tweet, he said that if those who “forcibly broke the Constitution and the law” were protected, then anyone could take over the constitutional office in the same way in the future.

Cheema said he had always wanted a “neutral referee” in 26 years of politics. He explained that “impartial umpire” keeps the same rules on both sides, otherwise, he could not be called “neutral” and the game would not be fair.

“I have made it clear in my report that I expect the intervention and what it needs, I would have appealed to the public if I had not been the governor.

“Political parties always want [army’s] 111 Brigade in the past. I asked him to give me at least four jawans and one subedar, ”he wrote on Twitter.

The Punjab crisis began when Governor Cheema on April 17, the day after the election of a minister in the storm-tossed Punjab Assembly session, declined to take the oath of office of Prime Minister-elect Hamza, announcing the meeting. The secretary’s report, the orders of the Lahore High Court (LHC) and the facts presented to him raised objections to the legitimacy of the election.

In the election, PTI MPA articles were injured, with Speaker Chaudhry Pervaiz Elahi – one of the two candidates for prime minister.

Hamza received 197 votes, including 26 from the PTI, while Elahi did not receive any as the PTI and PML-Q lawmakers felt they were not allowed to vote.

After that, Hamza went to the Lahore High Court on April 21, ordering President Dr Arif Alvi to appoint a lawyer to take the oath of office in the absence of the governor.

However, after the president’s delay in complying with the court order, Hamza went to court again on April 25. This time, he asked the LHC to order the Speaker of the Senate Sadiq Sanjrani to take the oath of office. In his ruling, LHC Chief Justice Ameer Bhatti ordered Governor Cheema to complete Hamza’s swearing-in process on April 28.

When the president and governor failed to comply with court orders, Hamza sought a third LHC intervention on April 29.

According to court orders, the Speaker of the National Assembly Raja Pervaiz Ashraf finally swore to Hamza the following day.

However, hours before Hamza’s swearing-in ceremony, Cheema rejected the resignation of former Usman Buzdar and reinstated his cabinet, which convened an assembly.

While the swearing-in ceremony was taking place, Governor Cheema urged the chief judge to take it into account. “ghunda gardi“(crime) in the House of Governors. He also said that the” drama of the prime minister’s oath “was” unconstitutional “.

“As governor, I do not allow the announcement of the appointment of any anti-constitutional and anti-fraud officer. The way in which they allegedly forcefully and fraudulently file an oath of allegiance, they have now tried to prepare a counterfeit notice.” He wrote on Twitter at the time.

At a press conference a day later, Cheema called Buzdar’s resignation a reality “.fitna“(corruption) after the constitutional crisis in the Punjab.

He described the swearing-in ceremony as “after arresting the Governor of the House” as illegal and unconstitutional. He said the prime minister’s son Hamza used the Punjab police and the bureaucracy as his own “ghunda power “and finally CM Buzdar explained and Hamza was introduced as prime minister without submitting his advice to do so.

Meanwhile, the formation of a new provincial cabinet was delayed until Cheema was removed, according to him It was morning a report published earlier this month.

The PML-N had already announced it was offering the Punjab governor’s office in its PPP coalition electing Makhdoom Ahmad Mahmood, its southern Punjab president, to the post.