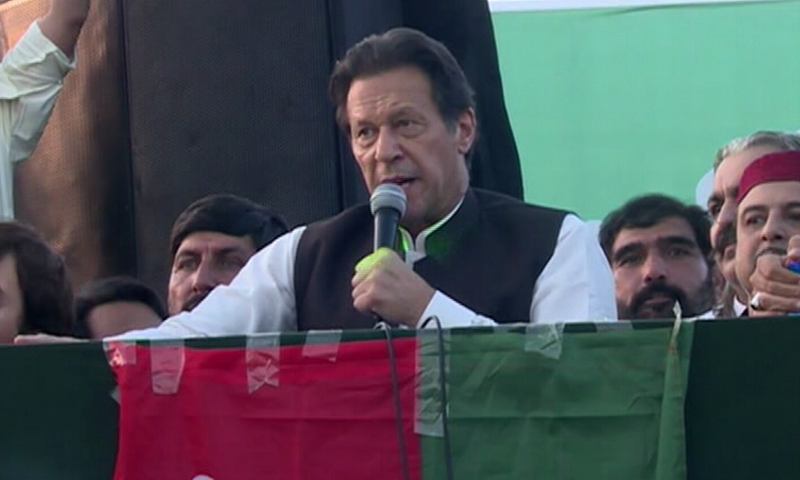 Former prime minister and PTI chairman Imran Khan on Friday told his party’s staff to be prepared for a long march to Islamabad, saying he would announce the deadline any day after May 20.

Speaking at a rally in his hometown, Myanwali, he said a sea of ​​people would reach the capital to demand only one thing – elections.

“People must decide who will rule us, we will not accept any foreign government.

Imran told his staff that no containers had been placed on the road to prevent them from traveling or that of Interior Minister Rana Sanaullah, who had killed 18 people.

He makes a vow that the nation will not bow down to anyone as long as it lives.

The PTI chairman is holding a series of rallies, from today until May 20. According to a tweet from party leader Azhar Mashwani, the next rally will be at Jhelum on May 10, followed by Attock on May 12, in Sialkot in May. 14, Faisalabad on May 15 and Chakwal on May 19.

Referring to his former aide Shahbaz Gill in a recent accident, Imran, during his speech today, said he had warned the government that if it touched on any PTI activity in the future, it would catch “three stooges and their bosses”.

Speaking to a crowd that shouted loudly, Imran said he had never seen such a large gathering before.

Commenting on his government’s achievements, he said it had reduced the funding shortfall for the first time in 11 years, adding that Pakistan was one of the few countries to protect its people from the coronavirus epidemic.

In addition, there were shipping records and plants, he said.

“[Prime Minister] Shehbhaz Sharif, who set me on fire for falsehood, was imprisoned [MNA] Rashid Shafique [in connection with the Madina incident]. Our women and children will take part in the march in Islamabad. If you try to stop it or install the same FIR, you will be responsible for what happens, ”he warned.

Because all party workers will not be able to reach headquarters on the day of the long march, they will have to strike in Myanwali, he said.

“I am summoning my sisters, brothers, youth and mothers to the capital because this is a Pakistani affair. [demand that he] to hold elections. “

He said it was the nation that would decide who would form the government instead of the US.

The PTI government of Punjab was bribed, he said, adding that the opposition party at the time should be ashamed of paying people to change their allegiance. He also asked the court why it had not taken action against the incidents.

“If our courts are not opened in the middle of the night, why don’t the burglars get fired? If these robbers come to your area you have to decide on them. These people who are betraying their country, the Constitution, the nation and the voters must be taught a lesson. for you so that in the future they may be afraid to repeat such deeds. “

He said that Allah had commanded the people to take action against evil and not to remain neutral. The only animal that can remain neutral, he continued.

The PTI chairperson expressed confidence that the people would make the right decision, saying this was the right time to pay. jihad as opposed to “dacoits” and get true freedom.

The former prime minister said he began his political career in Myanwali and that is where he launched his real liberation movement.

“I foresee a good time for Pakistan and look forward to where we should have been 75 years ago.”

He criticized the ruling prime minister, saying “the country has never seen a” slave like this one now “.

Shehbhaz ‘son, son-in-law and brother-in-law fled abroad while he was “appointed” as prime minister, Imran said.

Imran vowed to continue “jihad“against the leaders of the current coalition government, whom they called” robbers “.

He criticized the United States, saying “the conspiracy” started there. The biggest conspiracy was for the American people to join hands with Mir Jafars and Mir Sadiqs here to oust the government that inherited Pakistan.

Calling the leaders of the new coalition dacoits, he said they had looted the country’s money and built palaces in London. “These were the people who plundered the country 30 years ago and destroyed it.

“We do not bow down to him with any force. We are the people of the great leader Muhammad (Peace be upon him). There were two great powers at that time in Iran and Rome. Did my Prophet try to solicit donations or loans or did he do so? To whom did you give it?

Imran said it was a national choice whether we wanted to go to the sky or be a “boot repairman”. The nation’s founder, Mohammad Ali Jinnah, will not serve the US as these governors do, he added.

Emphasizing that Pakistanis are independent people, he said the community did not accept “robbers” like PML-N supremo Nawaz Sharif, Shehbaz and Punjab Prime Minister Hamza Shehbaz.

“We will not allow these thieves to be forced on us. You (the government) have filed a FIR against me, claiming that we are responsible for the incident that took place in Medina,” he said, referring to pilgrims who hunted and chanted slogan against PM Shehbaz and his entourage in Masjid-i -Nabwi last month.

Calling the union leaders “liars”, he said that wherever they went, they would deal with the songs of thieves and traitors.